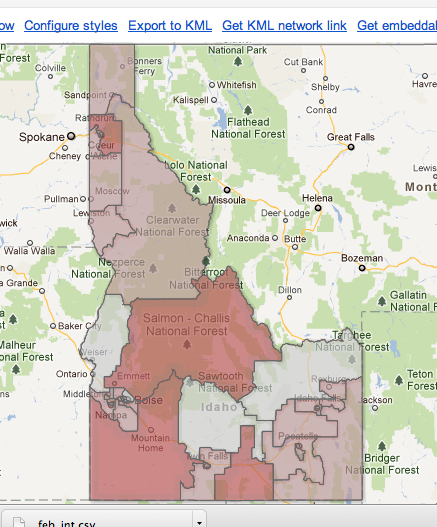 … why I am never going to be a programmer. Last week I saw several reporters tweeting about checking the Idaho Secretary of State’s Election’s page throughout the day so as not to miss any new candidate filings during the current Idaho elections filing period.

During candidate filing season, I check Ben Ysursa's website more often than I check Facebook. I'm not sure that's a good thing.

I feel for Kevin and the rest of the Idaho Capitol Press Corps. While the Secretary of State does make a good effort to provide public information, and Secretary of State Ben Ysursa has been a champion of public records, there has got to be a better way.

This is what happens now: The Secretary of State updates a .pdf file two or more times a day during the filing period and posts it on his web page. That means that anyone interested in the intrigue of candidate filing in Idaho’s newly refigured legislative districts has to bookmark the page, reload it several times a day and scan it for new entries.

I’ve been reading a lot about data journalism and thought I could follow some of the tutorials out there and create a nice little web scraper to tease out the scoops on candidate registration. I am really inspired by sites like ProPublica, which puts together awesome databases like this one on what influenced support on SOPA/PIPA or one on unequal course offerings in schools across the nation that incorporates maps. I like maps. The Guardian in the UK is also doing amazing things with data journalism and making information public and available and accessible. These guys make it look easy.

So I took a Boise City Community Education class on Ruby programming last week, thinking I could pick up a few new skills. The only thing I really learned was that I’m going to stick with WordPress as a blog platform and it’s unlikely that I’ll ever be a real programmer. But I suggested to the teacher, my friend Brett Nelson, who works at Customated.com, that I had this idea to grab the candidate .pdf from the Secretary of State, convert it into a useful format and post it somewhere automatically so that my reporter friends don’t have to work so hard.

As with anything, it’s harder than it looks, and Brett ended up doing all of the heavy lifting on this.

Here is what (I think) we did:

So what can you do with this web app? First of all, I think it’s the first Google map of the newly drawn legislative districts. I converted the .shp file (L93) that the Commission published to a .kml file (which Google Maps reads) using Qgis on my Mac. So now people cal fly around the new districts, find their house, , figure out which legislators have the best nearby hunting spots, etc. UPDATE: The locations plotted for candidates are their filing addresses, not necessarily their home addresses, and thus may be located in a different district.

Second of all, you can easily see which races are contested for the May 15 Primary Elections by selecting one of the three Legislative races and looking for red or blue markers on the map. This map is constantly updated with new filing information. Candidate filing closes in a week, on March 9, so we will have to figure out how to make this information useful on an ongoing basis. I’d like to add web links and Twitter feed info for candidates and links to news articles about the races (if anyone wants to help, please speak up)!

Please let us know what you think and feel free to use any of the info you glean from our web app!