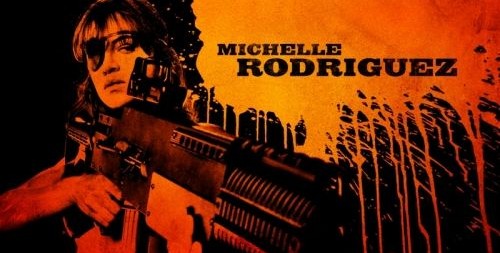 Machete is the answer

There is an unabashed popular culture war against immigrants in the United States. It has been progressing for the the last five years or so, ignited by the spectacle of the Minute Men, and fanned by Fox News and talk radio personalities. It has been strong enough to derail the national conversation on immigration reform again and again. Such a “pop culture” force must be met with an equal and opposite pop culture reaction. Pro-immigrant politics and activism are no match for the influence of popular culture.

The outrageously gory new film, Machete, could be just the crossover force that the immigrant rights movement needs right now.

When I first watched the trailer below for Machete at Vivirlatino I assumed it was merely a parody preview assembled by activists, and not a real movie, perhaps because of the opening line of the preview, referencing Arizona immigration politics.

But I went to see the film last Friday afternoon at a nearly empty theater in downtown Boise. I am no huge fan of naked gore or exploitation flicks. Ever since I saw Pulp Fiction in high school, and more recently, Inglourious Basterds, I’ve desperately wanted to like the genre. But I believe that all art is political and I have not been able to find any redeeming political value in Tarantino’s films; even the Nazi-bashing Basterds missed that boat.

The mainstream critics (are there any non-mainstream critics?) have all linked Tarantino and Machete director Robert Rodriguez, indicating that the political line in Machete is thin cover for the raw gore that that type of film exploits. But I don’t buy it. The timing is too perfect, the lines too dead on for it to be wanton, self-effacing Mexploitation.

No, Machete is an ingenious fictional response to what can only be described as a real ground war against immigrants. Peter Schrag of the Immigration Policy Institute has an essay out this week tracing the history of nativism in the U.S. back to the nineteenth century:

In another few years the nation may look back on the first decade of the twenty-first century, and especially the years after 9/11, as another of those xenophobic eras, like the Red Scare of the twenties or the McCarthy years of the fifties, when the nation became unhinged, politicians panicked, and scattershot federal, state, and local assaults led to unfocused, albeit often cruel, harassment of non-Anglo foreigners.

But just as Hollywood was implicated in those earlier right wing conspiracies and then emerged as powerful as ever to defeat the reactionary storyline, the time has come for Hollywood to crush anti-immigrant conservatism’s latest iteration.

Enter Machete. Full of stereotypes, cliches and naked violence (literally), the film gives audiences non-stop, wonderfully choreographed action. But it never strays from the path of righteousness. Machete battles corruption and hypocrisy on both sides of the border, with frequent calls to action. In the opening scene, as his corrupt Federale bosses attempt to call him off a job, Machete declares, “¿Si no nosotros, quien?” (I think I got that right, I’ve never figured out how to take notes at the movies.) Later, if memory serves, a young, “adopted” Latino revolutionary begs Machete to bring him along to the battle royale. Machete tells the young Guerro-Mexicano that it’s not his fight, to which the kid responds along similar lines: If not ours, whose?

Unfortunately, my analysis may appear on the surface to correspond with the reactionary response coming from the far right, which is painting this film as a call for race war. Their adolescent screeds have been summarily dismissed in several places, including in this thorough essay at the Southern Poverty Law Center. But Alexander Zaitchik at SPLC and other critics from the left are being shortsighted in ignoring the potential of this film for altering the conversation on immigration.

Far from a call for a race war, the film is an outrageous parody of the racialized “immigration debate” that already exists. It is taking the hostility of anti-immigrant forces—from the Minute Men to corrupt politicians and even the drug cartels—and dishing it right back at them. It’s making the restrictionists squirm (on their blogs, at least), which is precisely the necessary step in order to reclaim the megaphone. Machete has the power to put the nativist side on the defensive for five minutes, during which Congress can pass the DREAM Act and then take up full immigration reform in the Spring.

Plus, the movie is fun as hell. So even if my theory is way off, go see it.